Red Deer’s economy is comprised of a combination of many industries that provide over 62,224 jobs.1 Red Deer has a very skilled and educated work force, with over 4,000 businesses providing employment in Red Deer.

Red Deer has a young and educated population with an average age of 39.4. Over 52 per cent of the population indicates having attended training past high school such as post-secondary college certificates, diplomas or trades certifications.2

Red Deer Polytechnic is one reason for our highly skilled and educated workforce. RDP has over 80 program options, with 6,300 full and part-time students. The RDP is home to the Centre for Innovation in Manufacturing, which currently houses 4.2 million dollars in cutting edge, industry-leading, prototype and advanced manufacturing equipment.  RDP also includes the Donald School of Business, and the Alternative Energy Lab. They work directly with local businesses to develop customized trade apprenticeships and training programs to keep up with the changing needs of industry.

The top three fields of study in Red Deer are Architecture/Engineering and related trades, Health and related fields, and Business, management.1

The largest occupations held by residents are Sales and services; Trades, transport and equipment operators and related; Business, finance and administration; Education, Law and social, Community and Government; and Management.2

The Regional Labour Force Profile for Central Alberta March 2019 is the result of a municipal collaboration between The City of Red Deer, the Town of Blackfalds, Red Deer County, and the Town of Sylvan Lake.  After examining labour community flows, it became evident that the available workforce in the four municipalities expands to the census division of Division No. 8. 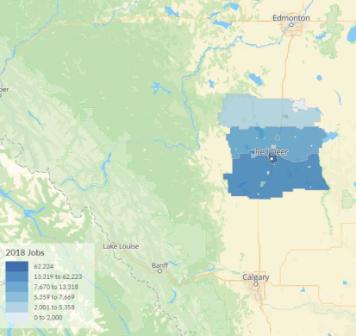