The Home Grill is a one-storey building that is significant for its mission style design influences which are unique in Red Deer. Its flat roof is hidden behind a tall curvilinear parapet, and the Flemish bond brick exterior is articulated by a fieldstone parapet.

In 1936 Sadie Collins of Calgary purchased White’s Bakery on 50th Street. She had the building demolished and a new brick building constructed for her restaurant, the Home Grill. The new building had a Tudor-style design interior with a large stone fireplace; modern lighting and a large modern Frigidaire plant.

Sadie Collins operated the Home Grill restaurant until the early 1940s when she sold it to John and Doris Leedham. They in turn sold the restaurant to a business syndicate from Calgary and Innisfail. The business syndicate completed extensive interior renovations, including the installations of booths and a new long seating counter, and reopened the restaurant in 1947 as the Ritz Café. The Ritz Café was a well-known meeting place until it closed in 1960.

Since then the building has housed a series of retail stores including the Elna Sewing Centre, Shores Credit Jewellers, Mark Realty Ltd., Cyclops Clothing, Clowes Jewellers, and Guys and Dolls Hair Studio.

The Home Grill was recognized as contributing to the downtown Red Deer streetscape when it received exterior rehabilitation as part of Red Deer’s Alberta Main Street project. 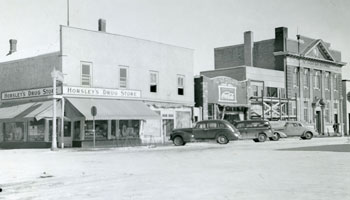