At 7:19 p.m. on Jan 31, the RCMP responded to a 911 report of a home invasion on 58A Avenue.  Two victims were located, with minor injuries, and the culprits responsible had fled prior to police arrival.  The male suspects stole the homeowner’s orange Honda Element, and left in that vehicle as well as a white truck.

Investigation has indicated that three males gained access to the residence with the assistance of a female, who was an occupant in the residence. The males were not known to the victims, and were wearing masks when they assaulted the two victims and stole a bank card.  The males were in possession of guns.

The female accomplice, Marie-Line Lariviere (54), has been charged with one count of robbery with a firearm. She has been released from custody and is next scheduled to appear in Red Deer provincial court on March 1, 2021.

On Feb. 1, 2021 the Honda Element was recovered in an apartment building parking lot on 59 Avenue and 60 Street.

The Red Deer RCMP continue to investigate this incident and are seeking any information about the identities of the three males involved.

Anyone who may have seen any activity related to the orange Honda Element before it was recovered is asked to call the Red Deer RCMP at 403-343-5575. If you wish to remain anonymous, you can contact Crime Stoppers at 1-800-222-8477 (TIPS), online at www.P3Tips.com or by using the "P3 Tips" app available through the Apple App or Google Play Store. 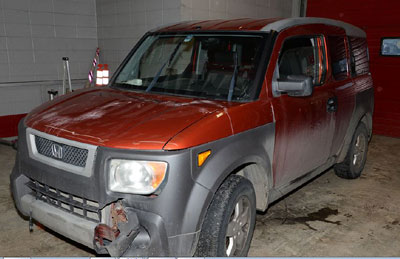