Visits by the Royal Family and Governors General

Since the early 1900s, members of the Royal family and Governor Generals of Canada have visited Red Deer.

Her Excellency came to Red Deer to celebrate the work of the Joint Refugee Committee of Red Deer and Lacombe. She spoke to a large crowd at the Memorial Centre on the importance of immigration and cultural diversity.

His Excellency visited Red Deer College to present Young Hero Awards and to participate in the planting of a commemorative garden next to the College. He also presented local writer Kerry Wood with the Member of the Order of Canada.

Her Majesty The Queen arrived at the Red Deer Industrial Airport and was chauffeured to the Red Deer Regional Hospital Centre where she opened the new state of the art pediatrics ward. A reception luncheon, co-sponsored by Premier Getty and Mayor McGhee, was held for Her Majesty at the Capri Centre. 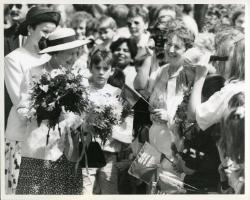 Her Excellency arrived at the Red Deer Industrial Airport with her husband. They attended a reception in City Hall Park, a luncheon at the Capri Centre, and toured the Kerry Wood Nature Centre before leaving for Edmonton later that afternoon.

Her Royal Highness the Princess Margaret, Countess of Snowden

The vice regal train arrived from Edmonton. Over the course of three days Their Excellencies attended an official reception held by Mayor Barrett at the Club Café, visited the Lacombe Research Station, CFB Penhold and Sylvan Lake.

Their Excellencies arrived by helicopter at CFB Penhold then proceeded to Red Deer where they opened the 1972 Red Deer Exhibition.

Their Excellencies visited CFB Penhold, Red Deer and Lacombe. His Excellency then went on a two-day goose hunting trip. 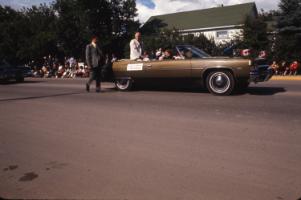 His Royal Highness the Prince George, Duke of Kent

The Duke of Kent, who was undertaking a tour of Royal Air Force bases in Canada, disembarked briefly from his special train when it made a short stop at the CPR station in Red Deer. His Royal Highness greeted members of the small crowd assembled on the platform and asked some questions about Red Deer, the size of its population and the chief industry. After about ten minutes the Duke excused himself and with a wave of his hand re-entered his coach.

Lord Tweedsmuir's vice regal train arrived in the afternoon at the CNR station on Ross Street. The train was used for accommodations for the vice regal party while Lord Tweedsmuir visited parts of central Alberta. Lord Tweedsmuir was greeted by Mayor Hogg and then accompanied to a reception at the Armoury. As Chief Scout of Canada he officially opened the new Rover Hut and was presented with a bow with a quiver of arrows made by Kerry Wood. He ended his first day by meeting with veterans. On Thursday a planned trip to Sylvan Lake, Benalto, and Rocky Mountain House was rained out. On Friday Lord Tweedsmuir inspected the cubs in Red Deer then visited Stettler and Lacombe.

The Earl of Bessborough

Lord and Lady Bessborough made a brief stop in Red Deer while heading south from Edmonton. At the CPR station His Excellency inspected the boy scouts and girl guides and presented local Scoutmaster Callendar with the Medal of Merit. 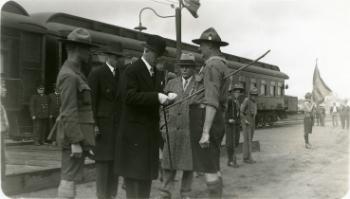 Lord Byng, the Governor General of Canada, stopped in Red Deer to unveil the new cenotaph on Ross Street. He and Lady Byng were met at the CPR station by a delegation led by Mayor Collison. Lord Byng also reviewed members of the local militia, the boy scouts and girl guides in City Park before returning to the station and embarking on his train. 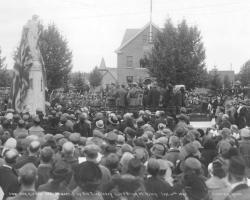 His Royal Highness the Prince Arthur, Duke of Connaught and Strathearn

The Duke of Connaught, the Governor General of Canada, accompanied by his wife the Duchess of Connaught and his daughter Princess Patricia, visited Red Deer in his capacity as Chief Scout of Canada to present colours to the local boy scout troop. The reception was moved into the CPR Station waiting room because of heavy rain. Mayor Welliver led the town's official delegation. Large numbers of children had turned out to see His Royal Highness because he had requested that school children be given a day's holiday in honour of his visit. Earl Grey

Lord Grey, the Governor General of Canada, was travelling north on the C & E Railway to Edmonton to attend the inaugural opening of the legislature of the newly created province of Alberta. He was accompanied by his wife, Countess Grey, Prime Minister Sir Wilfrid Laurier and other prominent persons. The train stopped in Red Deer for half an hour. Mayor Edward Michener led Red Deer's reception party at the station platform. The townspeople had decorated the platform and short speeches were given.